I still remember the excitement in the air on that bright day in 3rd grade. My parents pressed a few dollars in my hand as I hurried out the door to the bus stop. Now with bills tucked safely in my pocket I cantered across the yard jumping a small shrub in my path. Circling back, not satisfied with the last attempt, I approached the obstacle again with a whinny and a snort.

At school the classroom was buzzing with anticipation of the day ahead. Kids showed each other how much money they’d been given and made plans for purchases. The silver hands on the school clock moved painfully slow but at last it was time for our class to move to the library. Book Fair Day!

The cheerful library with its large windows and brightly cushioned chairs were infused with the smell of crisp pages and fresh ink that morning. Moving slowly and reverently through the racks and tables of new books my classmates and I choose carefully what books we would select in order to stretch our precious dollars as far as they could go.

I remember scanning the covers looking for horses. I stopped when a silvery foal stared back at me from a large soft bound book. She had a comical brown patch around one eye and long, lovely eyelashes. I read the title aloud, “Misty of Chin – , Chin, Chin-cottage?” Hum? Undaunted by the island pronunciation I made my purchase and clutched my treasure all the way home. 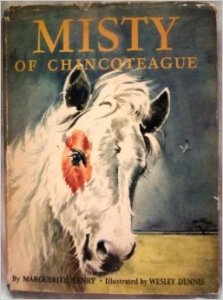 That was the start of a wonderful journey for me. A journey that would last a lifetime and plant girlhood dreams in my heart that I would never outgrow.

After reading Marguerite Henry’s Newberry Award winning book, Misty of Chincoteague, I knew that one day I must go and see the wild ponies of Asseteauge, smell the salty air and piney woods, step across its muddy marsh grasses and hear the sand pipers call. I wanted to meet the oyster men and brave firefighters and people who call themselves lifelong Chincoteaguers. (Shing go Tiggers)

Chincoteague (Shing go Tig) Island lies just along the eastern shore of Virginia’s coast. Little Chincoteague is protected to the east from the Atlantic by the larger, neighboring island of Assateague which stretches well past Chincoteague and up into Maryland. These island names were derived from the Gingoteague tribe of indians who once lived there. Assateague is home to the Chincoteague National Wildlife Refuge. Wild birds, deer and ponies call the refuge home. Each year for the past 90 years the ponies have been rounded up and driven across the narrow channel to neighboring Chincoteague and the foals sold at an auction. The event is called Pony Penning and helps to maintain the herd by containing their numbers to a sustainable level. The ponies are owned by the Chincoteague Volunteer Fire Department proceeds from the sale benefit the wild ponies upkeep and the fire department itself. 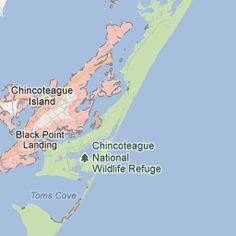 Eight years ago my husband surprised me for our 10th anniversary with a trip to visit this place that had lived in my heart since that book fair long ago. We stayed at Ms. Molly’s Inn on the Island where Marguerite Henry lived while she wrote Misty in 1946. My sweet husband saw in my eyes the girlish sparkle of imagination, wonder and awe as we explored the islands together that May. We were not there for Pony Penning that year but we dreamed of returning again someday.

This summer we journeyed to those salt marshes once again. This time to take in the excitement of Pony Penning week and share it with you.

March of this year marked the death of one of the island’s most beloved wild stallions, Surfer Dude. Each year the Fire Department selects several “buy back” foals to return to the island in order to maintain and improve the herd. Auction attenders may purchase one of these “buy back” foals as a tax deductible contribution to the Chincoteague Volunteer Fire Company. The CVFC maintains ownership of these foals and the buy back purchaser receives a certificate, may take a photo with their foal and may chose a name for the foal to wear in freedom back on Assateague.

These “Buy back” foals sometimes reach very high prices and with the death of Surfer Dude and the 90th Anniversary of Pony Penning prices for any of his foals were expected to be record breaking.

A group formed last spring with the hope of combining our pennies to collectively purchase one of these buy back foals of Surfer Dude. This crowd funded baby would return to Asseteague free and we could watch her grow and have foals of her own one day. I gave a small donation and planned a trip to be at Pony Penning and watch “our” baby be purchased.

It was an exciting week. Chincoteague does not disappoint. It is warm and welcoming with a sense of timeless Americana. She is seemingly unchanged and unphased by the scores of tourist who flock to her shores the last week of July each year.

Rob and I explored the islands by bicycle each day from sunrise till well after dark. I fell asleep each night happy and tired from “chasing ponies” all day.

On Monday of Pony Penning week before dawn the northern herd is driven by Salt Water Cowboys to meet the southern herds in the corrals. They are driven slowly along the atlantic in what is known as Beach Walk. Wednesday, at slack tide, the combined herds are driven through the channel to Chincoteague. We biked over early in the morning and gathered happily for hours in the marsh mud up to our calves (people pay big bucks for spa treatment like that) to wait for the famous swim.

A red smoke flare by the Coast Guard marked the beginning of the swim. We strained forward with binoculars to catch a glimpse of the ponies. Closer they swam, round pony bodies floating well, with eyes, ears and nostrils only visible above the water line.

Suddenly they were there in front of us, slick coated, scrambling to the shore. Dripping foals called for their mommas. Panicked mares answered trotting back and forth looking for their young. All were reunited and rested for a few minutes. Then the stallions began grouping their families and challenging each other. They were so close I could almost feel their whiskery breath as they stood resting, young ones nursing. Then the gate was opened and with a crack they were off, trotting down Main Street in a stunning parade of damp coats, whinnies and clip clops. Starry eyed children atop their Daddy’s shoulders together with teems of visitors and “tiggers” alike lined the street in a human fence. “Heey Hoooop”, “Mooove On”, the Salt Water Cowboys yelled. They kept the wild ones in their ranks as they entered the corrals at the Carnival Grounds. Stallions began the business of gathering their mares and foals once again and each herd gathered around large hay bales to eat and rest.

Tomorrow I will tell you all about the auction and our adventures there.

3 responses to “It all started with a book”