Our very sweet friend Mr. Ray came and picked us up for another historical fun filled field trip.   He took us over to the sea side town of Hartlepool. It is relatively close to us so it was quick ride over.

The military ship HMS Trincomalee has made its home at this history filled quay. 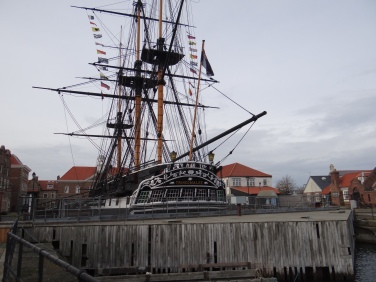 This link is a good one for looking all of the history of Hartlepool.

It was very interesting to climb around the decks and explore a historic frigate.

The kids enjoyed seeing how the sailors and officers aboard lived.  We were all amazed at how short the ceilings were.  They also became shorter and shorter as we defended into the lowest levels.    Joshua enjoyed pretending to fire cannons. 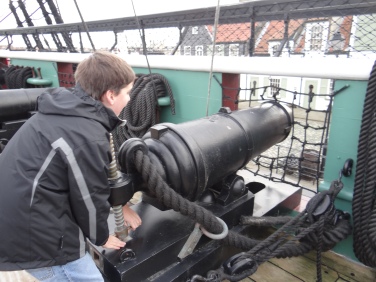 Meg of course walked around with her fingers in her ears afraid that one would go off.  Joshua, in typical brother form, would pretend to strike matches and light fuses.  That just set Meg off.  She has never forgotten the only other time she has been close to a cannon, at the Fairhope Pirates Football games.  We did not warn her that they were really going to fire the cannon every time Fairhope scored.  We ended up leaving that game at halftime as it was a blow out for Fairhope and she couldn’t take it anymore.

We found it also interesting how food was stored.  There is a pen in the bow of the first level for keeping sheep and goats.  Officers would bring live animals for themselves to dine on.   Live chickens were also kept onboard for eggs and meat as well. 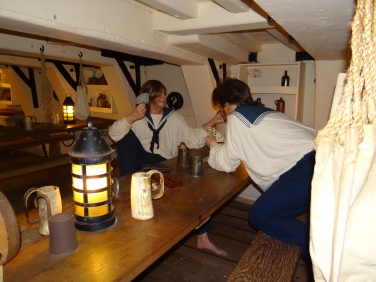 The museum complex is well designed and very education for old and young alike. 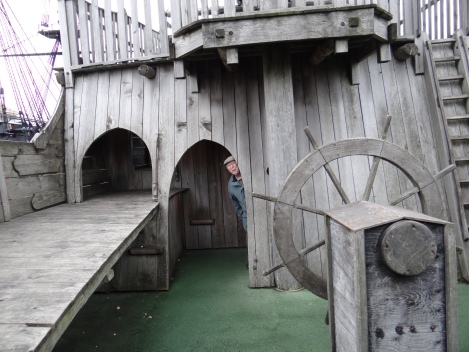 We enjoyed some delicious lunch in a historic looking pub.

Note the North Sea fish mounted above the fire.  It gets cold in that sea.  🙂

Each of the shops around the quay is, much like Williamsburg, there is a Naval Architect.  (The ship builders are wax figures), a tailor, food shops…….

The printing press below has a motto above the drying lines.  It reads: “The three great elements of modern civilization, gunpowder, printing and religion.”

I enjoyed the wax figures in each location. 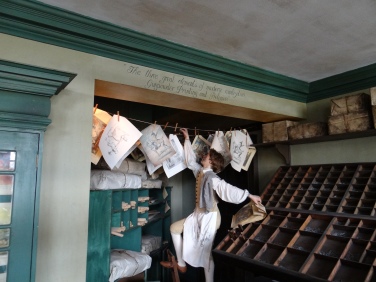 They are very busy in this created sea port.

I have many more interesting stories to tell you about Hartlepool in tomorrow’s blog post.