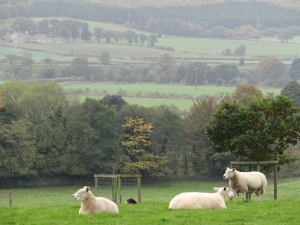 One thing that is a bit more expensive at the grocery shops here is beef.  That is probably just as well because I’ve grown accustomed to eating too much red meat anyway.  I’ve been cooking a lot more meatless meals and whole chicken meals here.  We occasionally have beef tacos or spaghetti with meat sauce but a lot less than we used to. BTW ground beef here is called beef mince… and if you get asked over for mince pies it is probably not “sweet mincemeat” pie like your grandma made.  It is probably mince beef pie.  Yeah found that out after I bit in… but that is another story.  Great pie, just not what I was expecting. 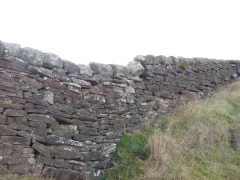 There is however another red meat that is very plentiful here, lamb.  There are many sheep scattered across this country.  Today as I was studying the Middle Ages with Meg we found out why.  After the Black Plague ravaged Britain there were barely any people left to grow crops and tend animals.  Many land owners looked for other ways to farm the land.  They found that large numbers of sheep could be kept on grasslands that would not need to be plowed or sown.  The fleece could be sold for large profits and soon wool cloth became England’s most important product.  The weaving industry grew up thriving new towns in Leeds, Halifax and Bury St. Edmunds.  All this happened by 1400.

Today as we travel from town to town we see sheep at nearly every turn.  Centuries old stone fences keep most herds contained, however as we driven along the moors many sheep still roam free contained only at road’s end by a few cattle grates.

Tonight we are having steak.  Not beef steak but lamb.  Don’t tell my kids though.  😉  I’m just calling’ it steak. 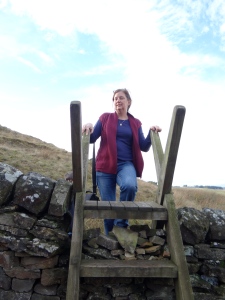 Beth climbing over a “stile” to enter a sheep field.