This is part 3 of our adventures this past Friday on Field Trip Friday #21  You can read post #1 and #2 here:

After leaving Lindisfarne Castle we walked down to the North Sea again.  This time we were on the opposite side of Holy Island from Cuthbert’s Island.

Some very strange rock formations were growing up from the ground all along the coast.  We let curiosity get the best of us and we trekked down.

This edge of Holy Island is facing outward (east) to the North Sea.

It is altogether different than the sandy harbour beach or the sheltered inside bit near St. Cuthbert’s Island where we gathered sea glass.

One our way down toward the sea we passed some old lime kilns.   These were strange cave like constructions long empty of the blazing fires now only echoing the nearby surf.

Joshua was trying to jump out and scare me so I went the long way around. I scared him instead.

As we looked again toward the sea we began to think and guess what these strange towers growing on the beach could be… stalagmites of sea salt? ……native sandstone worn down by the pounding sea? 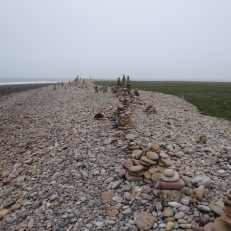 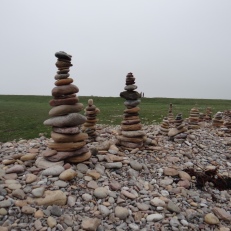 Upon arriving we discovered these towers are the North Sea equivalent to our Gulf Coast sand castles.  What a surprise!  These strange formation were formed by passers by and not by nature at all.

The coast was lined with hundreds of these towers.  It seemed everyone wanted to leave their mark here.  Joshua and Meg decided to create a tower as well.

Imagine if we all left our mark on the world for Christ with such enthusiasm.  If passers by saw the light of the world living in us and wanted that too.  What if they saw something “strange” from a far and traveled closer to see what this “strange” thing was?

Jesus said, “I am the Light of the World. Whoever follows me will not walk in darkness, but will have the light of life.” John 8:12

“You are the salt of the earth. But if the salt loses its saltiness, how can it be made salty again? It is no longer good for anything, except to be thrown out and trampled underfoot.  “You are the light of the world. A town built on a hill cannot be hidden.   Neither do people light a lamp and put it under a bowl. Instead they put it on its stand, and it gives light to everyone in the house.    In the same way, let your light shine before others, that they may see your good deeds and glorify your Father in heaven.”  Matthew 5:13-16