Today’s field trip was an adventure to the Yorkshire Dales to see one of the strangest sites I have ever seen. We traveled about an hour in Mr. Ray’s bonnie blue car (perhaps 45 miles) to see this unusual place.

The Yorkshire Dales are a beautiful place. The drive there was also lovely as the rapeseed (Canola) is all in bloom. The dales are awash in bright yellow checkerboards as the fields alternate between early wheat and rapeseed. The air is also filled with the heavenly fragrance of the yellow fields. 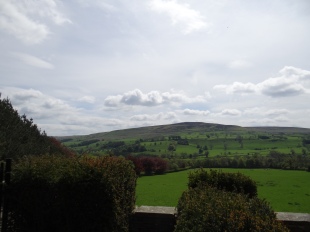 As we approached our destination we were quite early (hooray for the SatNav and Mr. Ray’s fantastic driving skills). We stopped in a village near our strange place to get a cuppa and watch the local “goings on”. This particular village is known as a racehorse training area. We watched as thoroughbreds paraded by on hoof and by van on their way home from the morning workouts. For my equestrian friends in the US almost all horses travel across this country in vans. Some vans are quite large. We saw one today with 10 windows so I imagine it to hold at least 10 -12 horses.

There were only a few miles left to go before arriving at quite literally one of the strangest places on earth, The Forbidden Corner.

Strange creature greeted us at the start

I can not begin to describe this place. It is a combination of garden, folly, grotto and nature maze.

A strange greeter met us at the entrance to the Corner.  Green Man they call him I believe.  I could not decide if he was a troll, tree fairy, or nome.  What say you?

This garden folly appears to be from the late Victorian age however, it was first begun in the late 1970’s to early 1980’s.

This garden maze seemed to evolve and grow over time.

A large series of grotto like caves sits in the centre of this garden maze.

The main cave has at its center a central round room.  In the darkness a greek statue of Hades the ancient Greek god of the underworld.  He is standing in the centre of a fountain and the water is lit in red lights.  All around the circular room are large wooden doors.  Each door looks just like the one that just slammed shut behind you.  Quickly one begins to question which door leads back the way you came.  Upon opening each door a different  adventure awaits.

One passage lead to a greek themed hall and out through an entrance of a greek temple folly.

The only way forward is through a shallow stream beset with stepping stones.  As we stepped on the stones to avoid falling in the stream motion sensors set off shooting sprays of water.  What fun!!

I will leave you with this panoramic scene of the Yorkshire Dales.  You can see a bit of the Pennines, the mountain range sometimes called the “backbone of England”.

I will tell you more about this strange place tomorrow.  Until then……..