My Dear friend Lynn invited me out last week for a lovely restful evening dinner.  Her kind husband drove us over to the Coach and Horses Pub and dropped us off.  The UK cities and countrysides are dotted with pubs.  Pubs are much more than a place to get a drink or a meal.  They are a place to catch up on local news, watch a great football match, or linger a long while sharing conversation with a good friend. 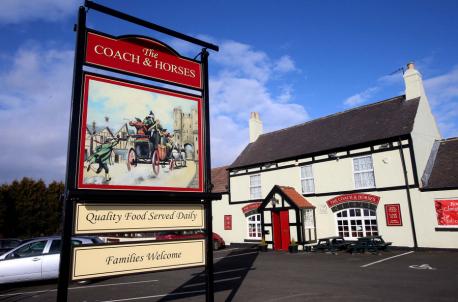 Lynn and I enjoyed a traditional English dinner with all the sauces and trimmings.  In a pub you can feel quite free to linger as long as you like.  Tipping is a bit different here in the UK.  You can leave a tip in a jar at the register but it not expected.  I believe that due to this fact there isn’t the huge need to turn over tables quickly.   Lingering after a meal is more the norm.

The Coach and Horses has, like most pubs, a long and interesting history and dates back to 1590.

The story begins in 1346 during the battle of Neville’s Cross.  You can read more about that battle here:http://www.battlefieldstrust.com/resource-centre/medieval/battleview.asp?BattleFieldId=28

During the battle of Neville’s Cross, the English Cavalry spotted a number of Scottish and French foot soldiers.  They found that those foot soldiers were spying in the enemy lines.

The Cavalry chased the soldiers up to the rise where the pub now stands and killed them..  The area became known to all as Butcher’s Race.

In 1590 a farmer named Hutchinson began to brew his own ale.   His pub and sweet ale became quite popular.  The special ale required honey for its brewing. That gave the original pub its name “The Beehive”.

In 1801 The Beehive became a popular stop for many a traveller and the name was changed appropriately to the Coach & Horses.

It is a beautiful old pub and it made a great setting for a nice meal and a long chat with a good friend.